With all the hype surrounding the Apple iPhone 6 and the fabled iWatch/Pedometer that’s coming out I thought I would give my own two cents and a little Marketing Prediction into the mix.

THE BIG TICKET ITEMS HAPPENING IN THE MARKET PLACE:

+ Hot Fashion with ME bracelets

If you combine all of that into possible things that Apple has to work with the current trending device and wrist band would look like what I am sketching up…  I have not seen anything like this yet so hopefully this makes a splash.

Ever since we took a vacation up north I’ve been fascinated by the idea of walking into nature… cleaving an old tree from the ground and using the once stationary inanimate object as a walking stick.

I keep asking myself why this found object has meaning, yet is not the idea of inanimate objects charged with new life the building blocks of stories through out history. The sword in the stone, the grail, a wizards staff, witch brooms, wands etc.

The idea is simple, the stick was just a stick… it would have like wise stayed in the woods… turned to dirt…. and no doubt been the fuel of another sapling, or ferns… but I’ve removed it from its cycle, effectively imbued it with purpose even if it is the purpose of “hey dude this stick looks cool, and I’m going to put it in my mud room by the back door”

What does this simple idea say about life in general?  Objects can and will remain in cycle indefinitely as they have a purpose given by natural order, but in some cases objects can be imbued with greater purpose outside of the original natural cycle or order.

The cause of giving objects greater purpose potentially makes the object more useful resulting in the object being greater than the some of its parts.

Its interesting, that the concept of “soul” and the purpose of inanimate objects sort of fits hand in hand?

So I pose this question… if the stick once made into a walking stick is not used does it still have purpose? or comically does the purpose dissipate like heat from the surrounding area around the walking stick?

Then ask the same question based on our bodies when we die? Would our purpose dissipate like heat? It sounds silly to say, but the simple analogy is meant to be direct.

Theoretically once the walking stick is used outside of its predictable natural order, the genie is out of the bottle… The possibilities for the stick are infectiously endless and almost have an inertia.

So where we make the analogy to our bodies and the soul instead of purpose dissipating…. the now imbued purpose of the walking stick actually starts radiating “potential energy” based on a higher probability of possible outcomes… in laymen’s terms in the analogy of soul…. based on what you did, and how you did it, and the effect…. theoretically you would have more “potential energy” upon death… which carries with it perpetual inertia… I had a flash of Obi Won Kenobi before Darth Vader cuts him down in the original Star Wars…

Ok its a little morbid, and has martyr written all over it, but is interesting that something inanimate can have an inertia of involvement even after its use.

The inertia of purpose… radiating potential energy…………… sounds like magic to me……. 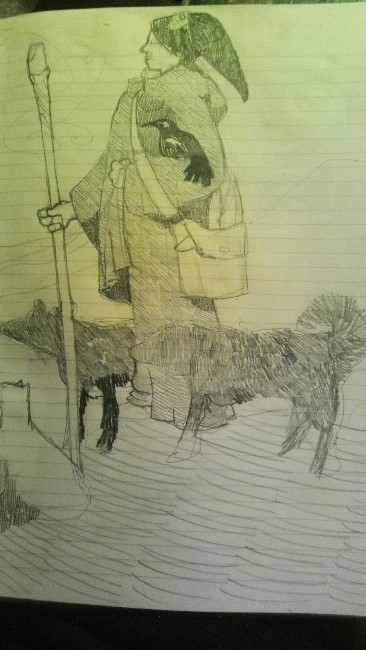