Creativity Is The Key

To some up what I learned at AdobeMAX is that, Developers need Creatives and Creatives need Developers but above all else… The fusion between the two wins the day, because it is the final product that needs a soul, and that soul is what connects with an audience…. and the soul of a project is the culmination of both. The Dark and The Light, the Love and the Hate, the Ugly and the Beautiful, the Creative and the Developer, the Architect and the Oracle…

One of the speakers talked about his need to be creative but given his disability he would seek what he couldn’t do first and then capitalize on those attributes about the project.  His work was astounding while very humble.

Adobe is on the verge of realizing products that give the ability to make responsive design easier, make apps publishable by Designers, bring great power to Developers and harness the collective fusion of entire wings of creative and developer dept. that in some cases would never see the front lines of cutting edge.

Because as I will now reverse my perfect balance just a little… An “idea” has to start somewhere.  That somewhere exists in the realm of Creativity… No matter who you are or where you come from, no matter what the cause is, or how extravagant the idea is, no matter how creative you think you are… The very essence of your idea, is creative. 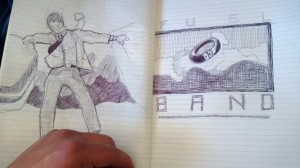 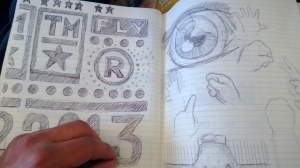 AdobeMax Day 3 was packed full of some of the best developers in the country. The courses raged from the deep inner workings of Javascript to the front line real world mobile app development of Adobe AIR to Phone GAP, Steven , Brad and I really jumped in the fire.

The owner and founder of TypeKit was there talking about how to embed fonts both locally and on the web. The strange almost unanswered questions of font distribution inside mobile apps and how the licensing works was answered by the owner of TypeKit. 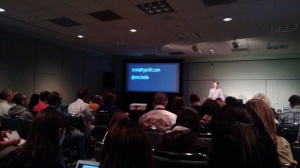 We talked to the mobile developers that built the 2013 Olympic mobile apps for Android and iOS. This presentation was really rewarding and great validation for Bader Rutter’s choices in the mobile development space… These guys were long standing and famous mobile developers and they were building mobile apps exactly the same way we do, they were having the exact same problems, using the exact same work flows(well almost) and to make things even better we shook their hands smiled and made new friends.

The Adobe Edge class I took with Brad was also very rewarding and brought continued validation. The presenter was one of the original Beta developers for the Adobe Edge application, and the examples he showed were incredible, pretty advanced and adoptable. About 90% of the class was struggling to keep up but Brad and I were just marching along.

The PhoneGAP class was fairly advanced and the presenter was a developer from Blackberry’s core team. While the phoneGAP examples to me were not that all impressive he did have some good points on optimization.

Which is actually a technical term for “OMG MY BRAIN HURTS!!!” 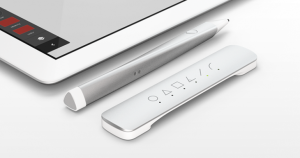 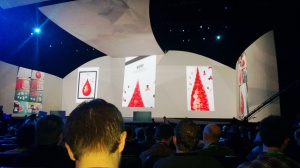 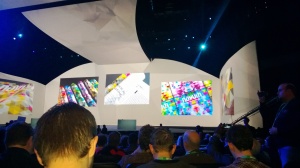